Animal rights activist and vegan chef Nikki Botha served on the on the Sea Shepherd vessel the MV Steve Irwin for three months. The SA Vegan Society talks to Nikki on her experiences. 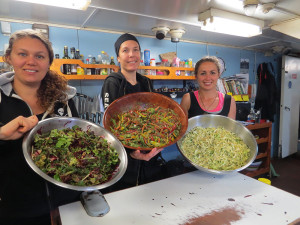 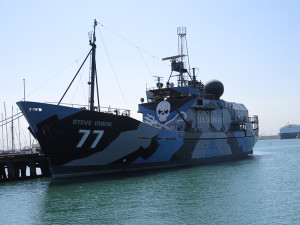 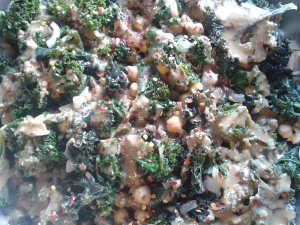 SAVS: What was your primary role on The MV Steve Irwin?

Nikki: I was the galley chief and the head chef.

SAVS: Cooking for a hungry crew at sea must be a vastly different experience than cheffing at a vegan restaurant like Plant. Can you tell us more about that?

Nikki: It’s chalk and cheese. In a commercial kitchen, you cook a set menu over and over again every day. Your major challenge is running the tickets in a timeous manner. Each station also has a dedicated person. Furthermore, if you run out of stock, you order what you need.

On the Steve it was more like mass catering three times a day but with limited ingredients because you can only cook with what you have. We relied heavily on donations and therefore we can only make meals with what we’ve received from the public. There was one week in which the only fresh produce we had to work with were onions, leeks and potatoes. Try making three meals a day for between 30 – 40 people and each meal is a different meal.

You really learn how to be creative and to think on your feet. Also, there wasn’t a dedicated person per station. As galley chief, I had to delicate prep tasks and whoever had time did the dishes if and where they could.

We need each volunteer in tip top shape because there is always a lot of work to be done. A happy, healthy crew makes for effective activists!

Nikki: There is no typical meal on the Steve. You cook with whatever ingredients you have on hand. I would however typically try and plan a meal with a mains, two sides, a salad and a desert. If we received loads of fresh produce in donations, I would try and make a salad buffet. I also tried to vary the style of cooking. With so many different tastes to cater for, it gets difficult. Some people don’t eat onion and/or garlic, some people were gluten intolerant, others didn’t eat cauliflower or coriander, some people didn’t like salt in their food, others liked raw only, some liked comfort food.

But because each volunteer on the Steve work their behinds off, I tried to have fresh, raw ingredients with as many meals as I could to make sure that their nutritional needs didn’t lack. A sick or tired crew due to a lack of nutrients don’t make for effective volunteers. We need each volunteer in tip top shape because there is always a lot of work to be done. A happy, healthy crew makes for effective activists!

SAVS: Many people aren’t aware that Sea Shepherd ships are vegan ships. Why do the Sea Shepherd commit to vegan only food?

Nikki: If we look at many of our campaigns – whaling, the dolphin hunting in Taiji, the Faroes grind – we fight against the consumption of these animals. Fingers are often erroneously pointed at us saying we are hypocritical because we eat pigs or cows or chickens. Of course this is completely incorrect – as you pointed out, we run a fully vegan operation (even our cleaning and beauty products are cruelty free and environmentally friendly). But this finger pointing makes for an important point: how can we say it is wrong to eat one species but not another? We cannot have double standards when fighting for the lives of animals, whether on land or in the ocean.

The meat industry is also the biggest contributor towards our environmental degradation. Sea Shepherd is a conservation society. We are trying to save this planet by protecting our oceans (which comprises 75% of our planet). So it only makes sense not to be complicit in an industry which is causing the downfall of our only home.

SAVS: Are all crew members on The MV Steve Irwin vegan?

Nikki: Not necessarily. But when on board the vessel, they are vegan because we don’t serve any animal products on board. Some volunteers were not vegan when they joined the vessel. But being surrounded by mostly animal rights activists they do learn a lot and their eyes are opened, and being served vegan meals three times a day also helps to convince them that being vegan isn’t difficult and you don’t have to compromise on taste and quality of food or your health when becoming vegan. They might not always be vegan when they join, but they sure are vegans when the time comes to go home!

SAVS: Were there any hair raising moments?

Nikki: Other than falling off a bicycle at 6 am on a Sunday morning, slicing it open and receiving stitches, no.

SAVS: What part of the experience did you find the most rewarding?

Nikki: There isn’t any one part. The experience in its entirety was more rewarding than I could ever imagine. But if I am absolutely forced to pin-point it, I have to say a) the camaraderie between the crew members (they become your family away from home) and b) the amount of growth I have experienced as a chef.

SAVS: Where do you see yourself going from now?

Nikki: The entire experience has humbled me and inspired me. More than ever I am inspired to be better, to do better, to work harder, to spread the vegan message and to up my game as a vegan chef.

SAVS: We would love for you to share any of your favourite summer festive meals? Could you supply a recipe or two?

Nikki: I am planning to bring out a vegan cookbook in 2016 inspired by my time on the Steve Irwin, but I can share one or two recipes with you. I still need to work out all the measurements, so I do encourage people to make these dishes by experimenting with the ingredients listed. It is SO important to understand your ingredients as it will deliver a better quality dish. Besides, experimenting is half the fun of creating!

One of my favourite healthy dishes I made was with kale (which I blanched), sautéing some red onion with balsamic vinegar, a lemon tahini dressing and chilli flakes. I toss everything together in a big bowl and serve it as a salad.

For something slightly more unhealthy, I love doing thrice cooked potatoes. Cut potatoes into thick chip sizes, boil until fork soft, deep frying them until they’re crispy and for the last stage bake the potatoes at about 200 degrees celsius. In the meantime, grill an onion or two with some salt and smoked paprika until completely soft, put in a blender, blitz until creamy. Just after they frying stage of the chips and before the baking stage, mix the chips well through the onion cream. Top off with some salt and then bake. Toss and turn the potatoes every now and then to make sure that you get even coloring. When the potatoes start to get crispy and brown, they’re ready for eating.

Well-planned vegan diets can reduce the risk of some types of chronic disease, including heart disease, and are regarded as appropriate for all stages of the life-cycle by the American Academy of Nutrition and Dietetics, the Australian National Health and Medical Research Council, and Dietitians of Canada