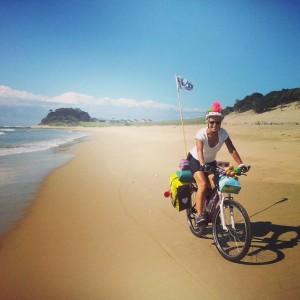 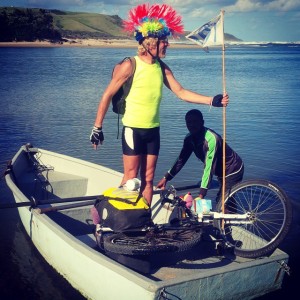 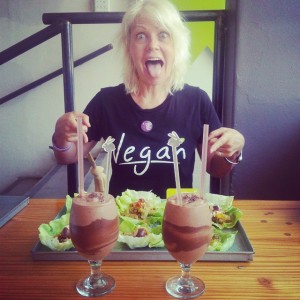 It’s International Vegan Day when I first get to chat with Andi Brand and Sven Fautley (the Velo Vegans) at a bring-and-share lunch in Durban. They have broad smiles, bushy hair, fit bodies, and radiate an air of carefree confidence. The duo have started their cycle journey that will see them wind their way through fourteen countries in East Africa. They’re taking a message with them that peace starts on our plates. Peace certainly tastes good as I savour my last bite of vegan apple strudel and start asking questions.

Luke: I hear that you’ve always been quite an adventurous person, Andi…

Andi: I’ve always been alternative. When I was 21, I sailed across the Atlantic in a 36-foot sloop, with three other people, much to the distress of my parents. Many years later, they still worry about me. They say that I shouldn’t be going on adventures any more at my age.

I just wanted to put my stuff in a rucksack, get on my bike, and ride – to see the world. It’s such a big world and a short life

Luke: What gave you the idea to start cycle touring?

Sven: What started it off was a fire that destroyed the house I was living in and everything in it ten years ago. Faulty electrics sparked off a fire in the thatch roof. It destroyed my whole computer and software business – all the computers, backups… everything. So I drew a line in the sand and said that I was going to change the way I live my life. That was a month after I turned 40. It was a turning point in my life. I thought, why hoard all this rubbish, all this material stuff, all of these possessions. I just wanted to put my stuff in a rucksack, get on my bike, and ride – to see the world. It’s such a big world and a short life. So that is where it started. It took four years to get the courage and earn enough money to actually do that – to get on my bike and ride around the country. Once I was cycling I really enjoyed it, but people asked: What are you doing this for? For what cause? What charity? At the time I just said:‘I’m just doing this because I like it.’ But the more I thought about it, the more I wanted to leave something meaningful. Coincidentally, at about that time I became vegan and realised that it contributes to society and spreads peace. I thought why not use cycle touring as a way to get this message through to people?

Andi: I got wind of this when I met Sven, which was almost two years ago. I was in a bike shop when I had a conversation with him on the phone for the first time. I wanted to find out about bikes and touring, but I didn’t really know how to do it, or what to do… or anything really. We connected as fellow vegans, and when he told me about the project, I thought it was an amazing undertaking. It was time for me to do something with meaning. I think I needed a purpose.

Luke: You call yourselves mobile minimalists. What is minimalism to you?

Sven: Minimalism is trying to keep the weight off the bike [laughs].

Andi: You can’t get much more minimalist than a bike, and whatever you can carry on it. Perhaps one step further would be just a backpack and your own two feet. Part of being minimalist is using technology to keep a mobile office with us. One of the things we’ve learnt is that having the right technology keeps us safe, more efficient and more able to communicate.

Sven: Technology has definitely allowed us to be more mobile.

Luke: You decided to have a goal of reaching a school in Ethiopia. Why didn’t you just cycle to Vereeniging? It’s much closer.

Sven: I wasn’t planning to go as far as Ethiopia at first. I was planning to go to Kilimanjaro. We discovered a charity called A Well-Fed World (awfw.org) in Ethiopia. They feed school children in Ethiopia vegan food, together with the International Fund for Africa. What I didn’t know about Ethiopia is that it has a high population of Coptic Christians. Coptic Christians do a vegan fast two or three times a year and some of them live vegan lifestyles. So veganism is quite prevalent in Ethiopia, and where it isn’t prevalent people are quite open to the idea. So Ethiopia turns out to be a fabulous destination.

Andi: I wrote to A Well-Fed World asking them if we would qualify for a grant and they wrote back saying, yes you do; here’s $1000. It felt good to get that kind of support. I think that’s the hardest thing about it. People often just want to know, why are you doing this, and is it safe? If people aren’t part of the cycle touring community, they don’t realise that there are many people cycling around African countries. It’s amazing when you see how many people are actually out there on bikes, although there are a lot fewer in Africa than in Europe.

Luke: What would you do in this hypothetical situation? You are cycling through the Rift Valley on a lonely dirt road when you turn the corner there is a herd of elephant blocking the way. You look behind you and there’s a clan of hyenas.

Andi: Turn the camera on [laughs].

Sven: Team up with the elephants because they’re vegan [more laughs].

Luke: I’m sure you’re going to see plenty of wild animals along the way. What is your plan for fresh water if you run out?

Andi: We have a water filtration system. I bought it in England. You can put dirty water in it and the filter kills 99.999% of bacteria. So I think we’ll be alright.

Luke: Some endurance athletes eat a plant-based diet to improve their performance. Do you think it helps with your cycling?

Luke: Do you have a sunscreen sponsor?

Sven: There’s always mud around, isn’t there? Elephants do that.

Luke: Yes, you can use mud if you run out. East Africa is full of thorn trees;how many times do you think you’ll get a flat tyre?

Sven: It doesn’t matter; we’ve got all the time in the world [laughs].

Andi: I don’t care because Sven fixes them [more laughs].

Luke: What response do people have to your message: ‘To raise awareness of the planetary consequences of our daily food choices and extend the spirit of Ubuntu to encompass all Earthlings’?

Sven: We summarise the message with a flag that says peace begins on our plates. We changed it from ‘your’ plate because it was very accusatory. People have mixed reactions; they often understand the peace concept, but not how it is connected to our plates. I’m not utopian in my thinking. We’re not going to have a perfect society. But it’s still better to move towards peace and not the other way. Society is in danger of going the other way at the moment. The easiest way to promote peace is with your food.

Andi: We have a few different audiences. People who are thinking of going vegan who might be inspired by the message, people who have never heard of veganism and don’t know what it is, people who are already vegan, and the social media audience.

Luke: I think your message is fantastic and I wish you good luck. Hambakahleabanganebami.

If you want to hear more from the Velo Vegans find them online at:

Animal agriculture is responsible for
18% of greenhouse gas emissions, more than the combined exhaust from all transportation – Fao.org. Spotlight: Livestock impacts on the environment.