The International Animal Save Movement has taken root in South Africa and puts a spotlight on factory farmed pigs, water shortages and local abattoirs. The Save Movement is a global movement based on peace and compassion

Cape Town animal rights activists have taken to the streets as part of a global initiative to highlight animal cruelty and to show compassion to pigs in their final moments before slaughter. Cape Town Animal Save held their first vigil with a gathering of over 30 animal rights advocates at Winelands Pork Abattoir in Bellville on Sunday, 20th August.

At least six trucks of pigs were scheduled to arrive on the day but none arrived during the time period allowed by the permit of the gathering. Activists say they suspect the abattoir operators delayed the pigs’ arrival as the police arrived just moments before their legal gathering permit expired. Activists also claimed to have caught sight of the pigs arriving shortly after the gathering dispersed. Cape Town Animal Save confirm they sent notification to the abattoir’s Managing Director Ken Polley prior to the gathering with the aim of establishing an open dialogue.

We are just here to say goodbye to the pigs. They are terrified and these are their last moments, we are here to show compassion”  Christine Streit (Cape Town Animal Save Co-ordinator)

Cape Town Animal Save said their second vigil proved more successful. Two trucks, each carrying around 200 pigs, entered the abattoir and activists had the opportunity to bear witness and give water to the thirsty and scared animals destined for supermarket shelves. Activists were also concerned about open hoses on the tarmac and water wastage by staff while offloading the pigs.

Obscured from the Public

Abattoirs are increasingly being hidden from public view, visible branding is absent and they are often renamed. For example, Winelands Pork Abattoir calls itself ‘Winelands Pork City’, and Robertson Abattoir has recently been renamed ‘Robertson Farm Assured Meat’.

As one activists recounts her experience ‘‘From the outside, it looks like a derelict warehouse right in the middle of the city industrial zone. No-one would ever know it was here. It’s directly next to the N1 and I must have driven past hundreds of times without knowing thousands of pigs are brutally killed right here every single day.” 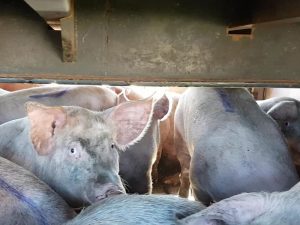 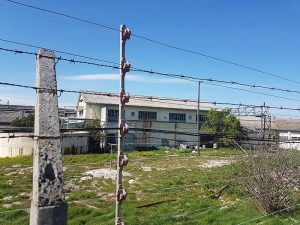 Winelands Pork Abattoir from the street

Water Use in Abattoirs

Animal agriculture has increasingly been under the spotlight in South Africa due to nationwide water shortages and river pollution. With 15 000 litres of water needed to create only a single kilogram of beef, many are beginning to question and compare this to other water saving measures.

The large quantities of water consumed by abattoirs is another growing public concern. Winelands Pork Abattoir falls within The City of Cape Town Municipality and needs an excessive amount of water to operate. According to the Guidelines for the Management of Abattoirs issued by The Department of Agriculture, water usage in abattoirs varies hugely depending on the type of animals being slaughtered. Approximately 900 litres of water are used per animal, and the process for slaughtering pigs tends to require more water than is needed for the slaughtering of chickens, sheep and cattle.

A government report compiled to assess water usage in the Western Cape confirms abattoirs rely on municipal water for the processing of animals and claims that most are reluctant to report or keep track of their water usage.

Compassion in World Farming SA (CIWFSA) claims that each year 50 billion litres of water go down the drain at South African abattoirs every year in the process of converting animals into meat. They say Johannesburg abattoir has the capacity to slaughter 2 000 cattle and 8 000 sheep per day and uses up to 2.5 million litres of fresh water every day to do so.

Due to public pressure and campaigning by the SPCA and Compassion in World Farming SA, SAPPO agreed to start limiting the amount of time a sow spends in a sow stall by 2020, but currently 60 000 female pigs are still trapped in sow stalls, farrowing crates and crowded group housing for the majority of their lives. In sow stalls, a female pig cannot can’t turn around, and in some cases can’t properly lie down. Sows are highly intelligent and social, and due to boredom and confinement develop neurotic behaviors. These sows produce the 2.8 million pigs South Africa consumes yearly.

According to the NSPCA, their Farm Animal Protection Unit proactively and reactively inspects all farming facilities from breeding all the way to slaughter and they frequently encounter horrifying circumstances. They say the demand for meat and animal products often supersedes the welfare of the animals.

Along with the welfare issues of raising pigs in confinement, the slaughter processes can be even more problematic. Staff turnover at slaughterhouses can be high and South Africa uses standard government-approved procedures which adhere to the same international volume and increasing accelerated speeds of processing. This can result in a range of questionable ethical practices from the problem of ‘the last pig’, to using carbon dioxide as an unpredictable stunning and gassing method which is strongly condemned by the NSPCA.

Pigs are highly complex, social and intelligent animals who clearly suffer from being raised in industrial farms, from their transport through to the slaughtering process they often will go to great lengths in order to avoid harm which was demonstrated recently when a pig jumped from a transport truck and was rescued by Pietermaritzburg activist Rekash Sinanin. 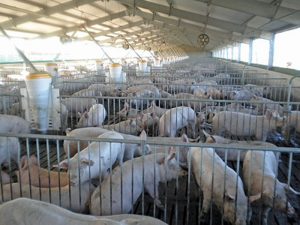 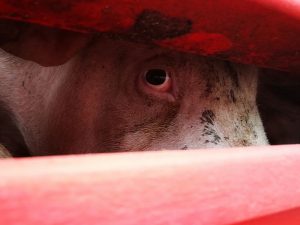 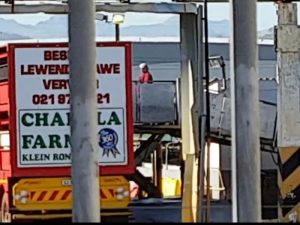 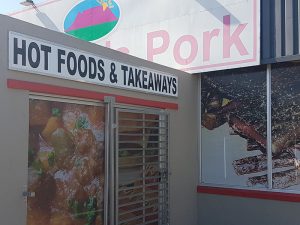 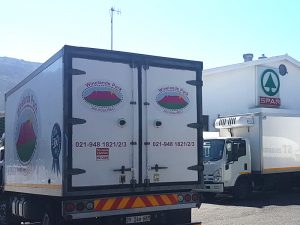 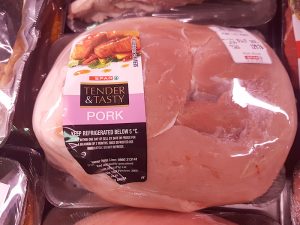 The South African Vegan Society rejects all forms of exploitation of, and cruelty to, animals for food, clothing or any other purpose.

Just like dogs or other companion animals, pigs have a right to life. Pigs on factory farms live a crowded life indoors without ever being outside and seeing the sun, touching a blade of grass, or being allowed to exhibit natural behaviours such as rooting” Anna Jordan (Director of The South African Vegan Society)

Increasingly more research is being conducted into the societal effects of abattoirs and the effects on the workers and surrounding communities. Research published in the Society and Animals Journal found people that people working in abattoirs are more likely to be desensitised to suffering, which correlated to them being more violent towards humans. The study which took data from over 500 United States counties found that when a slaughterhouse was introduced into a community, rates of violent and sexual crime increased.

These animals know what’s coming, and believe me, they fight against death with every fibre of their being. The deck is stacked against them; it’s a fight they will never, ever win. When you are faced with that kind of horror, you almost become numb to it. For many, it was a terrible experience, and to try and deal with it they would act out or try to desensitize themselves”  Slaughterhouse Worker

Post-traumatic stress disorder (PTSD) among slaughterhouse workers is also well documented. A study by the University of Windsor found the stressful work of turning animals into meat can take an emotional toll over time resulting in long term psychological mental suffering.

The Save Movement is a global movement based on peace and compassion. Their goal is to bear witness to pigs, cows, chickens and other farmed animals en route to slaughter in order to raise awareness of the plight of farmed animals.

The movement gained notoriety with the high-profile case of Canadian animal justice advocate Anita Krajnc who went to trial for giving water to thirsty pigs on a transport truck headed for the slaughterhouse. Although she initially faced up to 10 years in prison, the case was dismissed.

To get involved, or to help create awareness you can join a local Save Movement. If there is not a Save Movement in your area, you can start one by getting in touch with organiser Christine Streit. 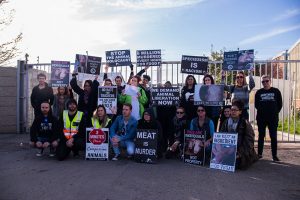 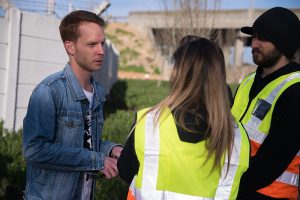 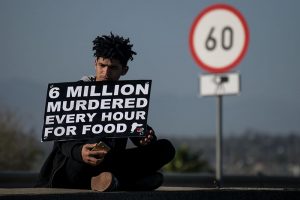 Animal Save Groups in South Africa

The Guidelines for the Management of Abattoirs – Department of Agriculture (Page 45)
‘Although the use of water in an abattoir varies hugely (depending on the type of animals that are slaughtered at the abattoir), it is considered useful to give an indication of the volumes of water that are used in red meat abattoirs, which are some of the most common abattoirs in Gauteng.The average water consumption of a red meat abattoir is approximately 900 litres per slaughter unit (dependant on the abattoirs size). This volume of water consumed can be analysed in terms of percentage usage per area within the abattoir’
http://www.gdard.gpg.gov.za/Services1/Guideline%20Manual%20for%20the%20Management%20of%20Abatooirs.pdf?fref=gc&dti=118412514998048

Agri-processing sector: Livestock Abattoir industry in the Western Cape  (Page 45)
There are 60 abattoirs registered with the Western Cape DoA. These abattoirs are not specific to a type of animal slaughtered, i.e., cattle, sheep, pigs and chicken may be slaughtered at one facility. Generally, the process for slaughtering pigs (per animal weight) uses more water than the slaughtering of chickens, sheep and cattle. None of the farmers contacted makes use of groundwater for the processing of the animals and they all rely on municipal water. Furthermore, while all the persons contacted knew approximately how many of each specific species animal was slaughtered daily, not all of the facilities kept track of water usage. Unfortunately, the data gathered from the abattoirs contacted throughout the province could not produce an accurate value for average water usage. This is mainly due to the inability of the facilities to give account of their water usage and the number of responses received. Average water usage at abattoirs in the Western Cape remains inconclusive. As a result, assumptions have been made based on the Red Meat Regulations (Gazette No. 8056, DoA, No. 1072 of 17 September 2004, Meat Safety Act, 2000 No. 40 OF 2000) and on personal communications from the WCDoA, 2015.
https://www.westerncape.gov.za/eadp/sites/default/files/your-resource-library/Syndicate%20report%20water%20and%20agriculture_July%202015.pdf

Winelands Pork Abattoir processes 32 000 pigs per month
With a slaughtering capacity of 8 000 pigs per week, it is classified as the largest pig abattoir in the Western Cape.
http://wlpork.co.za/master/download_files/2016-08-10_Company_Profile_2016_redesign_web_min.pdf

Animal agriculture is responsible for
18% of greenhouse gas emissions, more than the combined exhaust from all transportation – Fao.org. Spotlight: Livestock impacts on the environment.