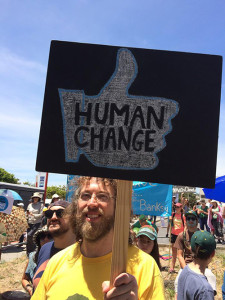 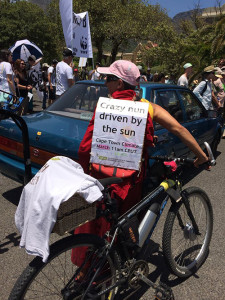 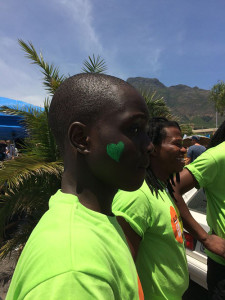 On the weekend of 28 and 29 November, hundreds of thousands of people around the world took to the streets on the eve of the Paris Climate Summit to demand a treaty to avoid catastrophic climate change. About 1 500 people gathered in Cape Town in global solidarity on a scorcher of a Sunday that left people with no doubts about the reality of global warming. Marches were held in Cape Town and Johannesburg too.

‘The attacks in Beirut and Paris [and Bamako] left hundreds dead, and most of us scared and uncertain across the world,’ read a call from the Cape Town organisers prior to the event. ‘This violence was designed to pit us against each other, to smother our hope with fear. But we have a chance to counter the terror with love and unity like never before.’

The Cape Town event was one of 2 300 events attended by 785 000 people in 175 countries across the world, constituting a record-breaking day in global activism ahead of COP21. Carrying umbrellas, placards and banners, we marched, cycled and skateboarded from the Cape Peninsula University of Technology, past the City Hall, up Adderley Street to Parliament. Although it would have been stirring to have someone from the vegan movement speak as part of the preliminary event, which featured a wide range of community representatives, it was a boost to see numerous fellow protesters carrying the vegan flag with an assortment of homemade banners and placards. 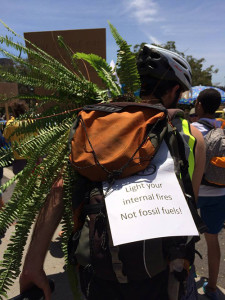 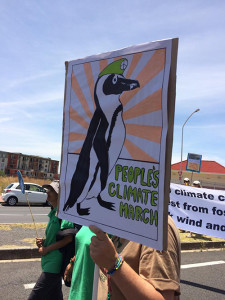 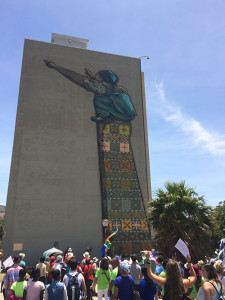 ‘Want to make a real difference to climate change and the environment? Live vegan! Eat like you give a damn,’ read one well-worded placard. Over and above the primary call to veganism – which is compassion – one of the most effective things an individual can do to lower their carbon footprint is to avoid all animal products.

As most vegans know, the production of meat and other animal products places a heavy burden on the environment – from crops and water required to feed the animals, to the transport and other processes involved from farm to fork. ‘The vast amount of grain feed required for meat production is a significant contributor to deforestation, habitat loss and species extinction,’ reads a dispatch from the Vegan Society, SAVS’s global umbrella body. ‘In Brazil alone, the equivalent of 5.6 million acres of land is used to grow soya beans for animals in Europe. This land contributes to developing world malnutrition by driving impoverished populations to grow cash crops for animal feed, rather than food for themselves.’ Making the switch to veganism one of the easiest, most enjoyable and most effective ways to reduce our impact on the environment.

At first, when the marshal called out, ‘keep the fish off your dish’, the response was noticeably feeble and hesitant. We made a point of shouting louder the next time round, and within moments, this phrase had been integrated into the rallying cry

As we marched, people began to repeat a rallying cry. ‘Keep the coal in the hole! Keep the oil in the soil!’ At first, when the marshal called out, ‘keep the fish off your dish’, the response was noticeably feeble and hesitant. We made a point of shouting louder the next time round, and within moments, this phrase had been integrated into the rallying cry. The millions of cows, pigs, lambs, chickens, ducks and all the other sensate creatures routinely devoured by humans remained voiceless, but ‘keeping the fish off your dish’ was a good start for a mainstream crowd of 1 500 people.

The Global Climate March was coordinated by a huge coalition of climate groups and activists working together to show world leaders and delegates gathered in Paris that the world is paying attention and that people are rising up. The key demands were that world leaders keep fossil fuels in the ground and finance a just transition to clean and renewable energy – good jobs, justice, and clean energy for all.

Pope Francis and Ban Ki-moon were among the people to donate 10 000 pairs of shoes to an installation in Paris to represent people who could not march because of orders imposed by authorities after the 13 November attacks.

To learn more about the links between veganism and the global environmental movement, visit: http://vegansociety.org.za/category/environment.

It is my view that a vegetarian manner of living, by its purely physical effect on the human temperament, would most beneficially influence the lot of mankind. – Albert Einstein